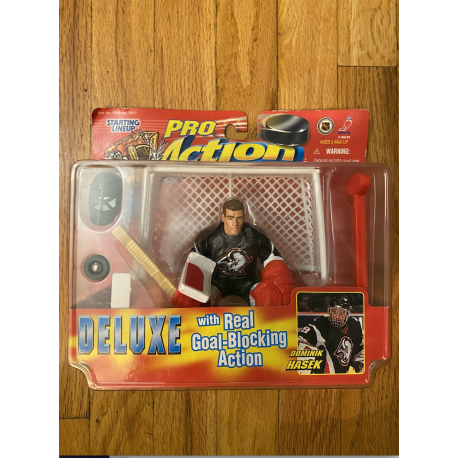 This 1998 Starting Lineup Pro Action Hockey figure captures Dominik Hasek in his prime. Hasek was one of the most dominant goaltenders in the NHL during the 1990s and early 2000s.

His acrobatic saves and unorthodox style made him a fan favorite. The three-time Vezina Trophy winner was also awarded the Hart Trophy in 1998 and the Lester B. Pearson Award, as the NHL players' choice for the most outstanding player. It’s no wonder he is called “The Dominator”.

This 1998 Starting Lineup Pro Action Hockey figure captures Hasek in his prime, and it would make a great addition to any hockey fan's collection.

NIP – Package has some storage wear. Please see all pictures.

We look forward to doing business with you!

Promotions, New Products and Services directly to your inbox